In this guide, you will learn how to secure your Firebase real-time database using Firebase Rules. Rules are a JSON and JavaScript based system that allow you to restrict database access to certain tags and/or users.

You will be making a simple app that lets users sign in with Firebase Authentication and saves their data in the real-time database. Then, you will write some rules to prevent others from accessing sensitive user data.

Here are some things you should know before you can get started with this guide.

This is guide covers advanced Firebase topics. For sake of keeping this guide at a readable length, some basic instructions will be glossed over with the assumption that you are aware of the workings of other components. If not, please take a look at more basic guides before getting started here.

Take a look at our guide on working with Firebase Rules for an introduction to the rules system.

Head over to your Firebase Console to set up a real-time database for your Firebase project. If you do not have an existing project, create a new one.

Use the navigation menu on the left to go to the Database section. 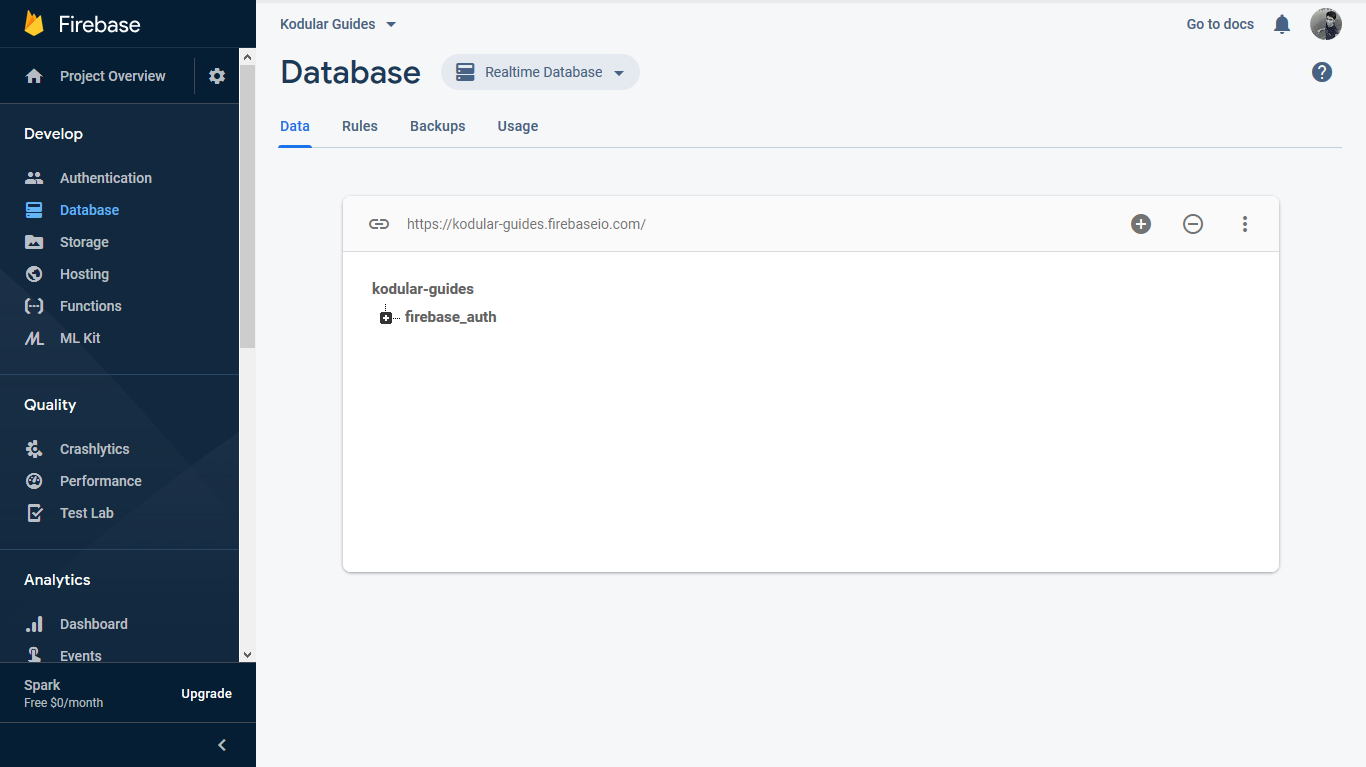 In case the real-time database has not been enabled already, scroll to the bottom and click on "Realtime database". 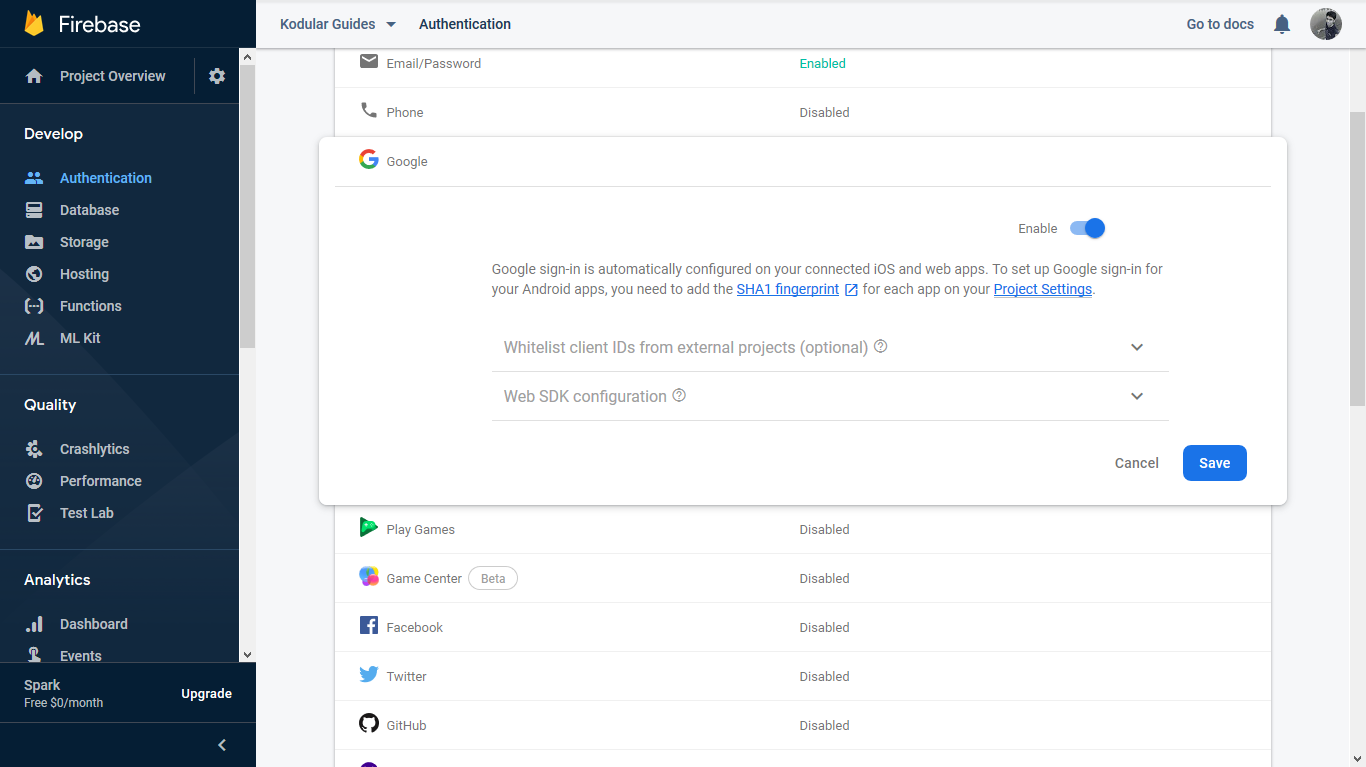 For this tutorial, we will store a tag for each user who signs-up in the app. The tag will be identified by the user's unique id, and will contain their name, email, and the Android version of their device. We wish to keep the users' names public, but their email and Android version private.

uids will be an array of all unique ids that are in the database. We will use this tag later to iterate through all users and get their names.

That's all the Firebase for now. Let's move to building your app. We'll come back to the Firebase console later to write the rules.

As usual, we'll start with a new project. We will need three buttons for this project - one to sign the user in, another to send their details to the database, and one more to fetch the names of all users in the database. Drag and drop three Button components and name them SignInButton, UpdateDetailsButton, and GetDetailsButton.

Next, drop a Text Box where the user will be able to enter their name.

Then, add a Notifier component and rename it to MessageNotifier. We will use this component to display the names of all users.

You will have to upload the google-services.json file to Assets to be able to export your app. This file can be obtained from your Firebase Console. 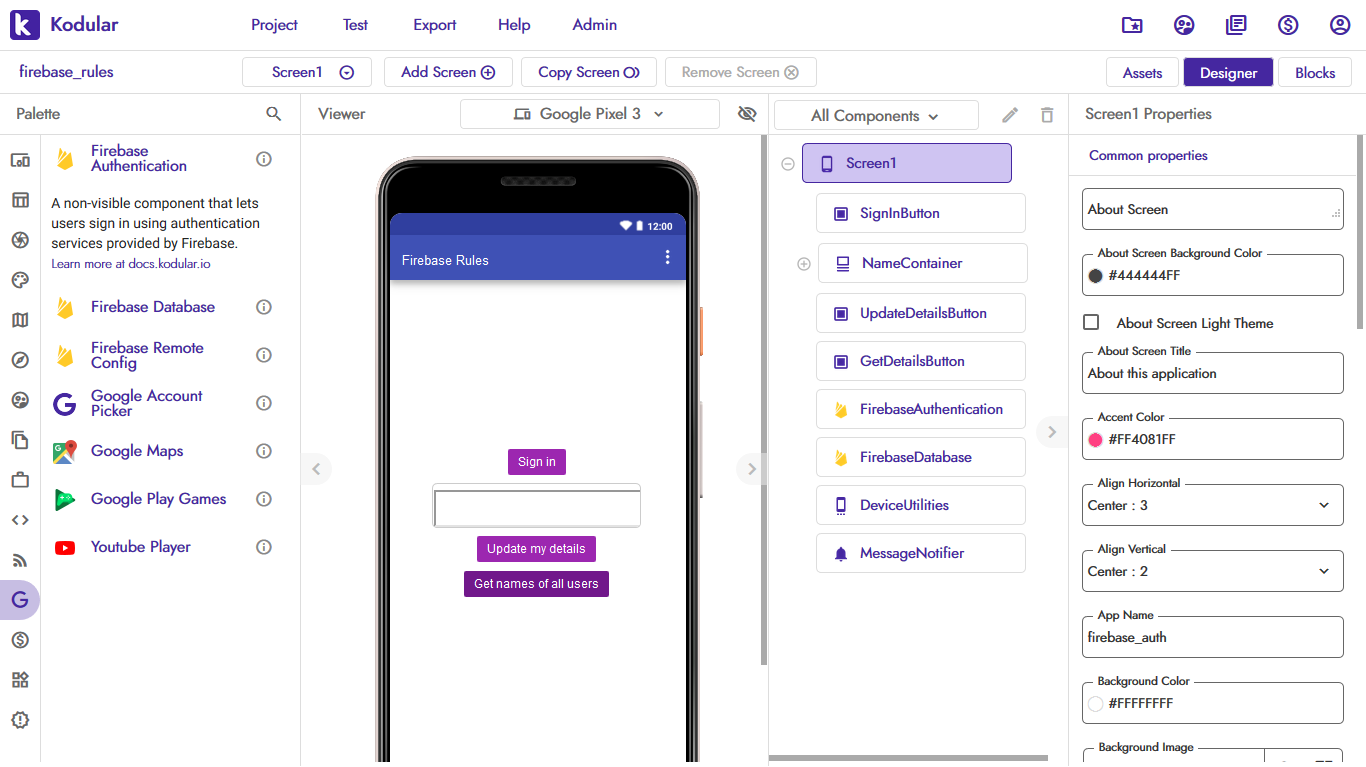 The components shown above have been styled with colors and borders to make them look better. Download AIA from the bottom of the page to use them in your app!

First, we add an event block to handle clicks on the SignInButton. The user is to be shown a prompt to sign in with Google.

Once the login is successful, we append the user's unique id to the uids tag in the database.

Next, we handle clicks on the UpdateDetailsButton. When the button is clicked, we first fetch the user's details so that we can get their uid. Then, using the uid, we update their name, email, and Android version. 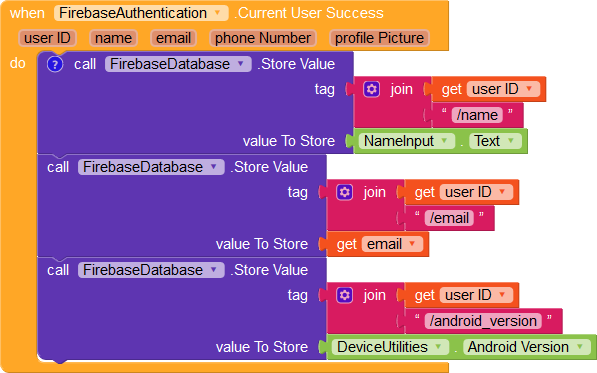 As of now, a user can fetch the list of all uids and update the details of any other user. We will be writing Firebase rules later to ensure the data a user can edit is limited to their uid.

Finally, we code the recursive function to get the names of all the users. Note that we cannot use the Get Tag List block as the rules we will be writing will block direct access to these tags.

To get the names of all the users, we will need two lists: one for all uids and another for all names.

We initiate the recursion using the Click event block for the GetDetailsButton.

When the value has been fetched, we populate the list of uids, and then fetch the name of the first uid in the list.

We do the same for each uid in the list. Every time we fetch the name of the uid, we remove the uid from the list and add the name to the names list. 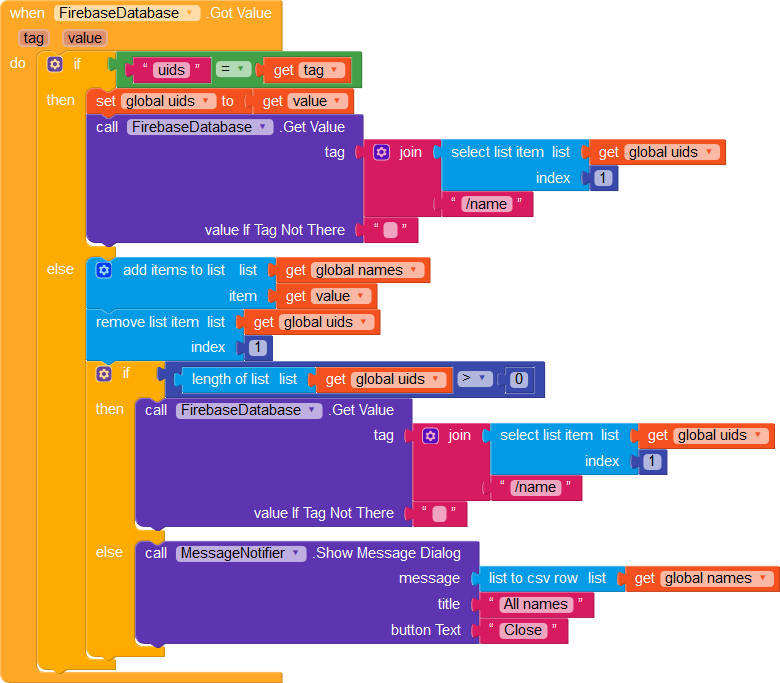 Once all names have been fetched, we show them in a message dialog.

Head back to your Firebase console. In the Realtime Database section, navigate to the "rules" tab. 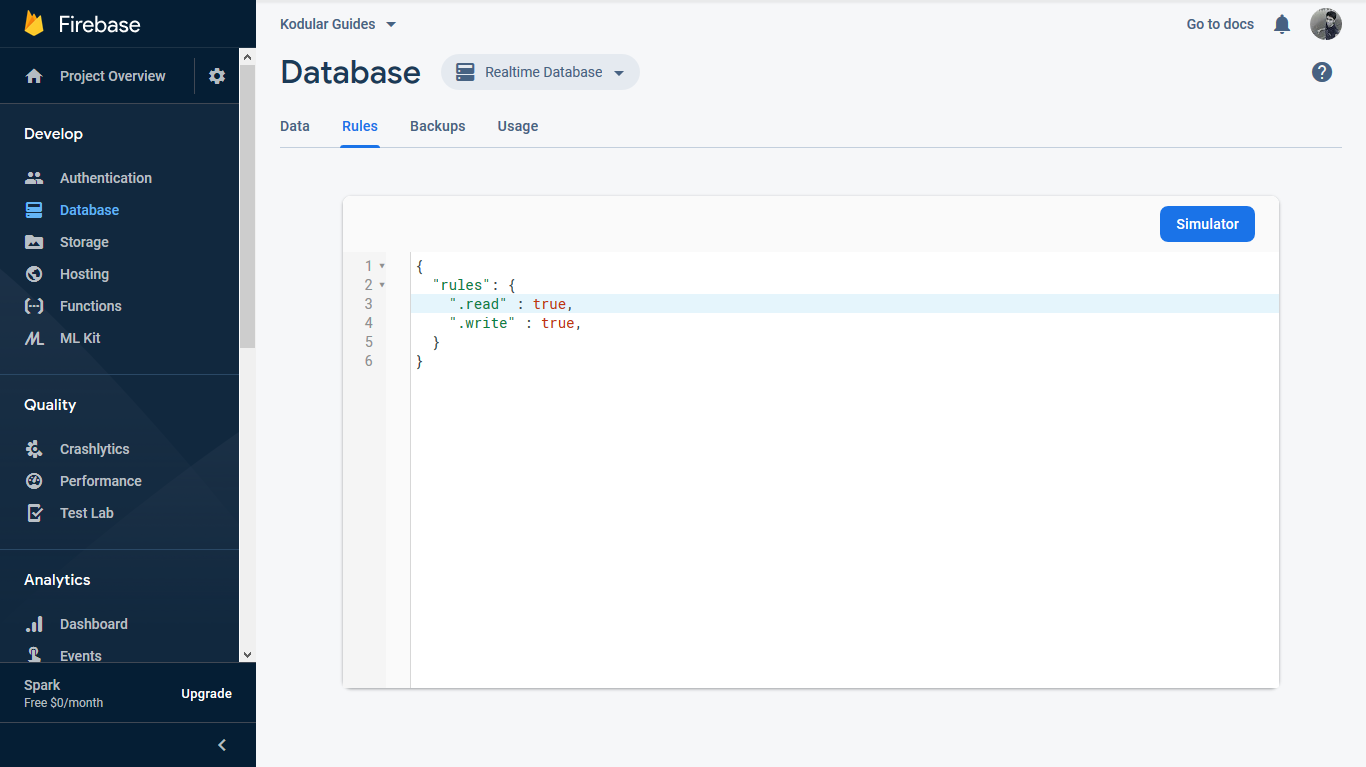 By default, Firebase allows full read/write access. If you created your database in locked mode, the default rules will allow only authenticated users, and your rules will look something like:

Neither of them are secure because all your users have access to all data in your database. Let's fix this with a few rules.

To start off, replace the currently set rules with a blank template as shown below:

Next, change the rules as shown to target all tags in your project bucket. Replace *PROJECT_BUCKET* with your bucket name. (The bucket name can be found in the designer properties of the Firebase Database component).

We wish for a user to be able to edit only their details. Each user has a tag for themselves, which is named as their uid. Thus, a user should only be able to edit the tag which belongs to them. We can use wildcard keys to select any tag inside your project bucket, as shown below:

However, the email and Android version should have restricted read and write access.

Let's take an example of a sample database to see how the rules work. The database currently has the following data: 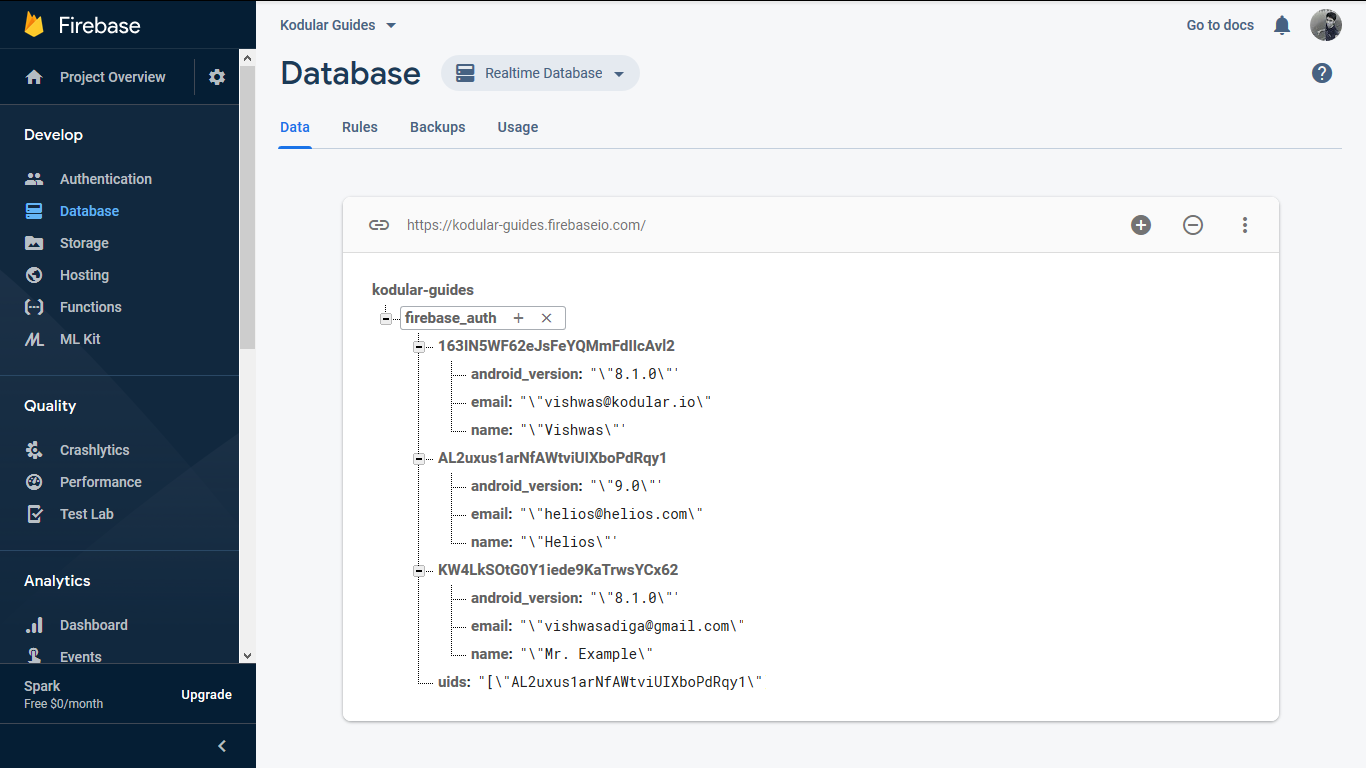 A user currently authenticated with the uid AL2uxus1arNfAWtviUIXboPdRqy1 is able to fetch their own name, email, and Android version:

The user is also able to edit the value of their name, email, and Android version.

In addition, the user can access the names of other users, say, one with the uid KW4LkSOtG0Y1iede9KaTrwsYCx62.

But they cannot get the email or Android version of other users.

Nor can they set the name, email, or Android version of other users.

Every user should be able to access the list of all uids, but should not be allowed to spam the list with random values. We can validate the data to ensure the user is appending their uid to the list, and not any other value.

Validation can be done using the following rule:

With the rule set, all authenticated users will be able to read the value of the uids list. An authenticated user can also append their uid to the list. However, no other value except the user's uid can be entered. In essence, the newData variable must have a child that is the user's uid, which guarantees that the appended list has the correct uid.

The current implementation, however, adds the user's unique id to the list every time they login. To keep only unique values of the uid, we prevent users from writing duplicates.

This ensures that the uid is written only if the current data doesn't already contain it.

Let's illustrate with the example of a user with the uid AL2uxus1arNfAWtviUIXboPdRqy1.

But cannot append anything other than their uid 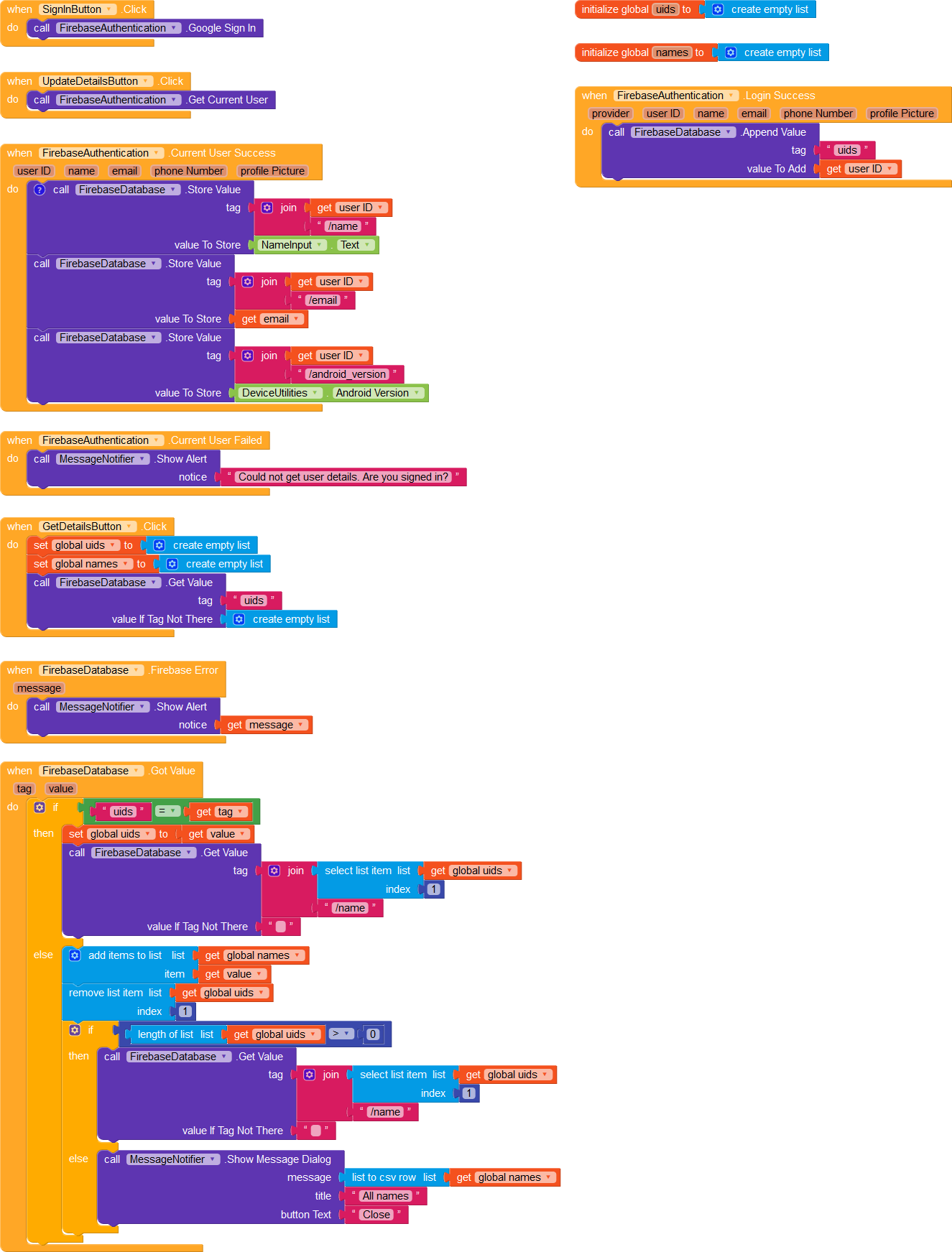 All the blocks we've used in this guide

Here is a summary of what you've learned in this guide.

Want ideas for making this app better? We have some things for you to try.

Get the AIA file here.